The Kern Water Bank was developed in response to wide fluctuations in California water supply. It is a highly effective water storage project designed to enhance groundwater resources, to supplement inconsistent surface water supplies, and provide a more stable, reliable and sustainable source of water particularly in dry years.  The Kern Water Bank generally accomplishes this by storing surface water that becomes available for  wet years, including flood water flows that might otherwise not be conserved, in a groundwater aquifer.  Those banked water supplies are later recovered for beneficial uses, typically in dry and critically dry years, when surface supplies are diminished and pumping native groundwater is unavailable or undesirable.

All of the SWP agricultural contractors, as well as the fifteen member units of the Kern County Water Agency, were offered the opportunity to participate in the development of a water banking project on the KFE property, which became known as the “Kern Water Bank,” but only five of these decided to do so. Those agencies that decided to participate, in addition to a mutual water company, all became member entities of a separate public entity created pursuant to the California Joint Exercise of Powers Act called the “Kern Water Bank Authority” – and are located in Kern and Kings Counties within the San Joaquin Valley.

The participants of the KWBA relinquished and DWR retired 45,000 acre-feet of SWP entitlement (now known as “Table A amount”) to DWR in exchange for the KFE property.  This retired Table A amount presently would be worth at least $5,500/acre-foot, or more than $250 million.  In addition, as part of the KFE transfer, the SWP Contractors funded minor remediation work on the site to address contamination associated with past oil and agricultural activities, and DWR transferred all future liabilities to the KWBA in exchange for $3 million.   Since the transfer, the Kern Water Bank Authority has conducted necessary environmental review, including CEQA, obtained the required permits, performed remediation, and invested about $65 million in infrastructure and improvements, including wells, canals, pump stations, and pipelines.  In addition, KWBA members have recharged nearly 3 million acre-feet of water in wet years and recovered 1.7 million acre-feet of water in dry years when available surface supplies were insufficient.

The water in storage and the costs to recharge and extract it are borne exclusively by the members of the KWBA.  Major infrastructure projects were funded through participant assessments, bonds and commercial financing ($46 million), a Prop 204 loan ($5 million), and a Proposition 13 grant ($3.4 million) and two Proposition 1 grants ($4 million).  KWBA’s members are solely responsible for the repayment of the loans used to fund the improvements.

The Kern Water Bank project serves two primary purposes: water banking and wildlife preservation, and is operated under a Habitat Conservation Plan / Natural Community Conservation Plan that provides for specific uses for the property through the year 2072.  These uses include Sensitive Habitat, which is set aside for endangered species, Compatible Habitat, which can be used for recharge, conveyance, and recovery of water, the Conservation Bank, which provides mitigation for other properties, and a Farming Sector.  The Farming Sector has not been farmed, but rather used in the same manner as compatible habitat.  The original HCP/NCCP does provide for the commercial development of 490 acres, but to help settle litigation (PCL v. DWR described below) pending against DWR and certain SWP Contractors since 1995, KWBA committed to not develop this acreage as part of a Settlement Agreement executed effective May 5, 2003. 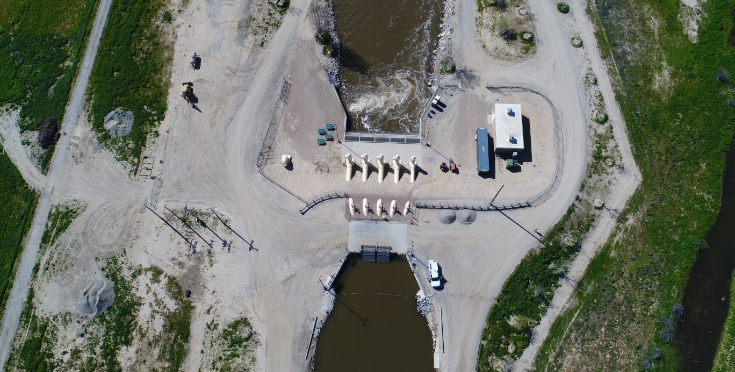 Representatives of State Water Contractors and Department of Water Resources execute the Monterey Agreement – Statement of Principles, which included a principle for the transfer of the KFE property from the Department of Water Resources to the Kern County Water Agency in exchange for retirement of 45,000 acre-feet of State Water Project entitlement or Table A amount.

Monterey Amendment to SWP contracts and agreements providing for transfer of KFE property to the Kern County Water Agency (KCWA) and the Kern Water Bank Authority in exchange for relinquishment and retirement of 45,000 acre-feet of SWP Table A amount.

Title to KFE property is transferred to the Kern Water Bank Authority, and KWBA members relinquish rights to 45,000 acre-feet of SWP Table A amount which contractual water rights are permanently retired by DWR.

Signing ceremony for completion of the Habitat Conservation Plan (HCP)/ Natural Community Conservation Planning (NCCP) for the Kern Water Bank project. The HCP/NCCP ensures that the property will fulfill the dual roles of both water and wildlife conservation.

Kern Water Bank project is recognized by the Association of California Water Agencies with the Clair A. Hill Award for excellence in water management in California.

Construction started on major facilities, including a 6-mile long canal, 72,000 feet of pipeline, and 40 new or rehabilitated wells.

Then U.S. Secretary of the Interior Bruce Babbitt visits the Kern Water Bank, hailing it as “the most effective groundwater storage program in the United States, probably the whole world.”

Construction started on the River Area Project, including eight new wells, pipelines for these wells plus seven other wells, a large diameter conveyance pipeline to route water for both recharge and recovery, and a lift station.

Planning and Conservation League and other petitioners (PCL plaintiffs) commenced a lawsuit against DWR and others in Sacramento County Superior Court, challenging the 1995 EIR prepared by CCWA for the Monterey Agreement (PCL v. DWR).

PCL’s first amended complaint adds 5th cause of action for invalidation of Monterey Amendment and DWR’s agreement to transfer the KFE property to KCWA (Validation Cause of Action).

Court of Appeal for the Third Appellate District opinion in the PCL v. DWR (83 Cal.App.4th 892), concludes CCWA’s Monterey Agreement EIR violated CEQA, DWR as lead agency must prepare a new EIR, and dismissal of the Validation Cause of Action was error.

Court of Appeal denial of PCL plaintiffs’ petition to set aside approval of Monterey Amendments and agreement transferring the KFE property.

Joint Statement on Monterey Amendments Litigation summarizes principles of settlement of PCL v. DWR, including principle that the “Kern Water Bank will remain in local ownership and will operate as it has, but will be subject to addition restrictions on use.”

PCL plaintiffs, DWR, specified SWP Contractors, and KWBA execute Settlement Agreement in PCL v. DWR, requiring (among other things) DWR’s preparation of an EIR for the Monterey Amendment plus certain provisions of the Settlement Agreement (Monterey Plus Project), “KWBA shall retain title to the KWB Lands” with operation and administration subject to additional restrictions, and PCL plaintiffs’ dismissal of the Validation Cause of Action upon timely occurrence of certain conditions.

DWR certification of Monterey Plus EIR (2010 EIR) and filing of return to satisfy the requirements of the 2003 Writ, including 2010 EIR and May 5, 2010 Notice of Determination.

PCL consent to entry of order discharging the 2003 Writ (discharged in August, 2010).

Central Delta Water Agency, Center for Biological Diversity, Carolee Krieger, California Water Impact Network (CWIN) and other petitioners (CDWA petitioners), new lawsuit consisting of a petition for writ of mandate, etc., in Sacramento County Superior Court against DWR, the SWP Contractors, KWBA and its members and others, including a CEQA cause of action alleging DWR’s 2010 EIR, and a new Validation Cause of Action challenging the validity of the 1995 Monterey Amendment and 1995 DWR agreement to transfer of the KFE property (CD1). CD1 petitioner Carolee Krieger verified the petition as the executive director of CWIN. Ms. Krieger was affiliated with Citizens Planning Association of Santa Barbara County – a plaintiff in the PCL v. DWR case and signatory to the 2003 Settlement Agreement that required dismissal (and precluded refiling of) the Validation Cause of Action in PCL v. DWR and agreed title to the KFE property shall remain with KWBA.

CD1 trial court statement of decision that the Validation Cause of Action and similar mandate cause of action are time-barred by affirmative defenses of statutes of limitation and laches.

Rosedale ruling that DWR’s evaluation of the KWB did not comply with CEQA, and CD1 ruling against CDWA petitioners on all their CEQA arguments except with respect to the KWB as provided in the ruling in Rosedale.

Trial court joint remedy ruling in CD1 and Rosedale does not set aside approvals or enjoin KWB use and operation pending further CEQA review by DWR.

Trial court findings and peremptory writ of mandate (2014 Writ) in CD1 and Rosedale requiring DWR’s revised EIR for the Monterey Plus Project evaluating the KWB.

Upon entry of judgment in CD1, CDWA petitioners appeal various CEQA rulings and the dismissal of the Validation Cause of Action as time-barred. In response, certain real parties file notices of cross appeal that CDWA petitioners’ CEQA challenge to the 2010 EIR is barred by res judicata for not challenging the same 2010 EIR in PCL v. DWR. The appeals are pending.

Center for Food Safety and certain CDWA petitioners (CFS petitioners) new lawsuit consisting of a petition for writ of mandate against DWR, SWP Contractors, and KWBA and its members in Sacramento County Superior Court, challenging the 2016 REIR under CEQA (CFS). CFS is considered an action related to CD1 and Rosedale.

CFS petitioners file motion to stay, arguing the trial court lacks jurisdiction to discharge or determine whether the 2016 REIR complies with the 2014 Writ until all appeals in CD1 are over.

Trial court case management order sets briefing schedule and a joint hearing in CD1, Rosedale and CFS on August 18, 2017, to hear argument concerning any objections CD1 petitioners have to discharge of the 2014 Writ and all issues raised by CFS challenging the 2016 REIR.